Sexual harassment can affect anyone in the workplace, regardless of gender. It is a form of sex discrimination defined as unwanted sexual advances, requests, or verbal or physical conduct toward another. Though predominantly characterized using employer to subordinate, harassers and their victims can hold any status in the workplace.

If not addressed appropriately, sexual harassment can lead to a hostile working environment.

The Sacramento law firm of Perkins Asbill offers sound legal advice, personal guidance, and dedicated representation to employees throughout central and northern California who feel they have been the victims of sexual harassment in the workplace. 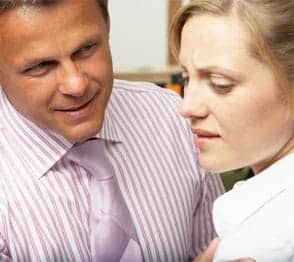 Many of our clients first contact an attorney at the firm for answers to important questions: What is sexual harassment? How do I prove I am working in a hostile environment? How do I make the behavior stop? For honest answers and straightforward advice, simply contact us today.

Under California law, in order to establish sexual harassment, it is necessary to prove that the conduct is severe or pervasive and that it affects an employee’s ability to work. This is what is known as a “hostile work environment.” It is not necessary that you be the target of the behavior. Repeatedly witnessing inappropriate actions and comments can cause the work environment to be hostile.

Another form of sexual harassment is known as quid pro quo. To put it simply, this is a situation in which a manager, supervisor, or other superior promises a raise, bonus, or career advancement in exchange for sexual favors. The opposite situation may also occur, in which the person in a position of power threatens demotion or other consequences if these favors are not provided.

It is important to understand that if a coworker is touching you or making comments of sexual nature, you should make every effort to make sure the coworker knows that this conduct is unwelcomed.

In most sexual harassment cases we see, there is a pattern of behavior and ignored complaints. Employers may be held strictly liable under California law for sexual harassment by a supervisor if they fail to take prompt corrective action following a report of harassment.

What should I do if I think I have been sexually harassed?

If you think you have been sexually harassed, there are important steps to take to protect yourself and your career.

In many cases, speaking directly to the harasser and clearly stating the conduct is unwelcome is enough. In cases of subtle harassment, the perpetrator may not be aware their behavior has crossed a line or is unwelcome.

However, if you feel directly addressing the unwanted sexual conduct will jeopardize your career or safety, you may speak to someone in a position of authority, like a supervisor or an HR representative.

It can be helpful to review your employer’s policies on sexual harassment and follow the reporting procedures. Addressing sexual harassment through the internal process may not stop the behavior, but it is necessary.

If a victim of sexual harassment fails to notify a manager, perpetrator, or HR, it can be challenging to establish a case.

If you feel reporting the unwanted sexual conduct will negatively impact your career, it is important to know that retaliation is prohibited by federal and state laws.

Another critical task is collecting evidence as soon as the harassment begins. This may be as simple as recording the time, date, and description of events in a logbook or calendar. If the sexual harassment continues or escalates despite following internal procedures, keep track of the events, who you have reported the unwanted behavior to, and what steps the company has taken to resolve the problem. In addition, collect any memos, emails, texts, recordings, witnesses, or other victims willing to share their experience.

I feel uncomfortable around my co-worker. How do I know if my co-worker’s conduct qualifies as sexual harassment?

Feeling uncomfortable around a co-worker can make work-life stressful. Knowing if your colleague’s conduct qualifies as sexual harassment is essential to stopping the behavior in the appropriate manner.

Organizations typically have policies regarding unwanted behavior. As discussed above, it is important to follow the proper procedure to stop the behavior and protect your credibility.

Many employees are uncertain if the unwanted conduct they experience in the workplace qualifies as harassment, sexual or otherwise. Annoying or rude behavior may be unpleasant, but it may not meet the criteria for legally defined harassment.

According to the EEOC, sexual harassment occurs when the conduct:

Sexual harassment can involve a wide range of behaviors. Some of the most common unwelcome conduct includes:

If the behavior is consensual, it will not qualify as sexual harassment. However, the conduct can be considered inappropriate and may violate company policy.

What if my manager fires, transfers, or passes me over for a promotion after I submit a sexual harassment complaint?

Retaliation makes up most EEOC litigated cases, accounting for 55.8% of all charges filed. Common reasons employers retaliate against their employees include:

An employer may choose any number of ways to retaliate against an employee. The most commonly cited retaliatory consequences under the EEOC involve:

It is crucial to gather all pertinent evidence to establish that your employer fired, transferred, or passed you over for a promotion due to a complaint.

What if I am sexually harassed by a client, vendor, or non-employees at my workplace?

If you are sexually harassed by a client, vendor, or another non-employee, your employer has certain obligations for keeping you free from discrimination or harassment. When the harasser is not a direct employee, it is referred to as third-party sexual harassment. The term may apply to an independent contractor, customer, and delivery driver, among others.

According to the EEOC, an employer can be held responsible for third-party sexual harassment when:

Employees have the right to file sexual harassment complaints about third parties with their employer. When a company fails to take action, it is held as liable for a third-party’s actions as an employee.

Employers can exercise their duty to protect in the following ways:

If you are sexually harassed by a third-party, your employer has an obligation to provide you with a safe, discrimination and harassment-free workplace.

Reporting Harassment vs. Filing a Lawsuit

A first step toward resolving any workplace difficulty is to talk to human resources or a supervisor if something inappropriate is going on at work. This can be the most effective way to address the situation and to put an end to the behavior. Sometimes, however, employers refuse to act. In other cases, reporting harassment to a supervisor could be problematic, or your supervisor may be the harassing party. Under these circumstances, you should contact an attorney who can guide you in protecting your rights and pursuing legal action to stop the harassment.

Litigation is almost always a last resort in these cases. Ideally, your lawyer can help assist you to ensure that your employer take the necessary corrective action. If your employer fails to respond appropriately, we have the skill and experience to fight for your rights in court.

How do I move on with my life and career after being sexually harassed at work?

Moving on with your life and career after being sexually harassed can be overwhelming. Sexual harassment has received wider recognition in the media over the years. Victims have stepped forward to share their stories, shedding light on the profound and lasting impact of sexual harassment.

According to the EEOC’s Study of Harassment in the Workplace, 25% to 85% of women reported being sexually harassed at work. The high variability is explored in the research, concluding:

Women are not the only targets of sexual harassment, but the high variability in the above percentages can reasonably indicate that other victims may suffer from systemic unwanted sexual behavior.

Moving on after experiencing sexual harassment is a mental health concern. Every affected person has an individual experience and background, requiring coping mechanisms as unique as their story.

Two consenting colleagues whose ended relationship has caused one to harass the other during working hours will have a different impact than a transgender woman who is subjected to ongoing ridicule and exclusion from work-related networking events.

Coping with the aftermath of sexual harassment is a very personal process that will likely take time.

With more than 30 years of employment law experience, our lawyers know how to work through the intricacies of the California Labor Code, the federal Fair Labor Standards Act and other applicable law. To get started, arrange a confidential consultation by calling (916) 446-2000.